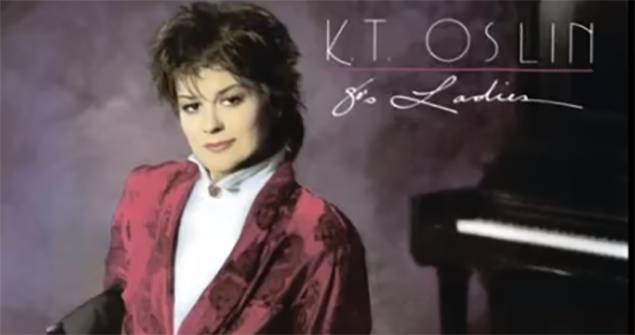 In Country Music, artist stars burn bright and loyal fans keep the stars burning bright some stars burn fast and hot for a short period. In the late 80’s there was a star that burned bright and fast. K.T. Oslin would not be considered a one hit wonder but there is no denying her star faded as the 90’s took a younger, hotter look. K.T. Oslin was an artist that could have been your best friend’s mom. Here song “80’s Ladies” was an anthem for a lot of mom’s in the late 80’s.

In the grand scheme of things, there really aren’t too many artist’s that have had hit songs, even fewer that have had a #1 hit.  And, beyond that, only a select few that have had what might be called an anthem for a generation.

K.T. Oslin was born in Crossett, Arkansas, but moved a couple times as a child and considers Houston, Texas her hometown. Perhaps not surprisingly she began her music career more in folk music than country.  In the early part of her career she worked with Guy Clark, one of the legendary Texas singer/songwriters. That led to singing commercial jingles and television commercials.

In 1987, Oslin signed with RCA Records. She won a Grammy and was named the Country Music Association Song Of The Year in 1988.  She went on to chart 15 songs on the national country music charts.

In 1995 she had Coronary Artery Bypass Surgery and essentially retired.  She still does, at the age of 72, make appearances at charity and music related events.  Otherwise, the never married Oslin lives in Nashville.