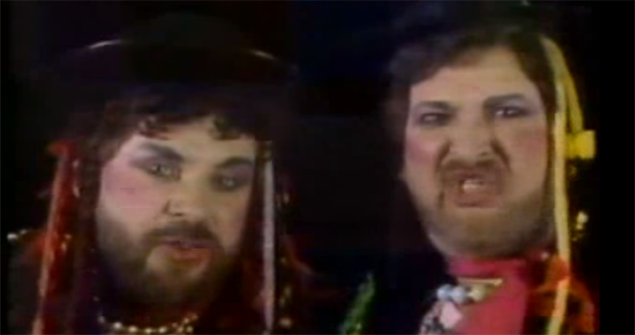 One of the funniest videos in Pure Country history was Moe and Joe’s “Where’s The Dress?” Joe Stampley‘s son Tony Stampley, who is turning 58 today, wrote the song. Ironically the night that Moe and Joe debuted the song on the Grand Ole Opry, Boy George’s Culture Club was also performing in Nashville.

In 1990, the U.S. government files a civil complaint to collect $1.6 million in federal back taxes, penalties and interest from Johnny Paycheck for 1980-82.

In 1988, Restless Heart‘s “Bluest Eyes In Texas” rises to #1 on the Billboard country chart.

In 1986, Alabama‘s album “My Home’s In Alabama” is certified double-platinum.

in 1977, Elvis Presley‘s “Way Down” goes to #1 on the Billboard country singles chart.

And born on this date in 1923, Jim Reeves, born in Panola County, Texas. He enters the Country Music Hall of Fame in 1967, three years after a plane crash takes his life.