Every weekday morning at 7:40 test your country IQ…

01/05/21 – This Pure Country Superstar made his final appearance at the Ryman Auditorium on this date in 2000. He was joined on stage by his wife, John Anderson, Travis Tritt, and Montgomery Gentry.

01/04/21 – This Pure Country Superstar is celebrating a birthday today. Born in Elkhorn, Kentucky, she is a distant cousin of Loretta Lynn. A member of the Grand Ole Opry, she was awarded the CMA Female Vocalist of The Year in 1996.

12/29/20 – This Pure Country Superstar makes an appearance on the Ed Sullivan Show on this day in 1963? He was 14 at the time and he sang four covers. Who is the Superstar?

12/28/20 – This Pure Country Superstar was born on this date in 1958 in Tulsa, Oklahoma. His great voice, traditional style, and a sense of humor made him a mainstay in country music. Sadly we lost him earlier in 2020.

12/21/20 – This Pure Country Superstar makes his feature film debut in a movie with Robert Redford in 1979. What was the movie?

12/10/2020 – This Country Music Lady was discovered singing the National Anthem at the National Finals Rodeo in Oklahoma City. It was a good discovery she had over 20 number ones?

12/09/2020 -Alan Jackson’s rendition of “Tall, Tall Trees” gets planted at #1 on the Billboard country chart in 1995. The song is written by two members of the Country Music Hall of Fame: who are they? 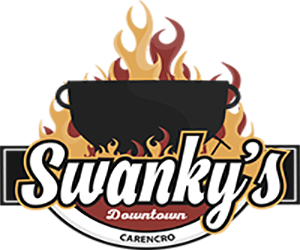 Swanky’s has reopened with all of the great menu items you love. Dine-in (50% capacity), take-out, and deliveries through Waitr or DoorDash. For take-out orders, please call 337-706-7978.


The world-famous hamburger steak is back (you may need help with it). The Catfish Carencro is waiting for you. Delicious poboys that are overflowing with ingredients, salads that are so fresh they slept in the garden last night, wraps that are to die for, and the Swanky Burger – it’s a burger with a fried egg, and it’s is back at Swanky’s Downtown Carencro. Try the club sandwich done the Swanky’s way.


Check out the menu at SwankysDowntown.com. They’re Back Swanky’s Downtown Carencro open for dinner and lunch Wednesday through Saturday.